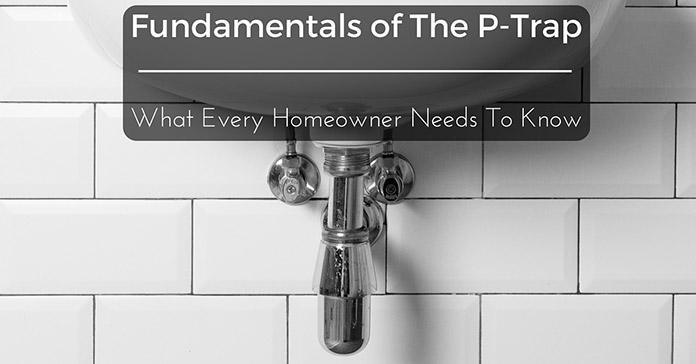 Before you read this article, take a look under your kitchen and bathroom sinks and see what you can find. Of course, you’re going to find some sort of drain pipe under there, but take note of its shape. If your house is fairly new or your plumbing has been updated, you may find a P-shaped water trap attached to your sink. This is called a p-trap. Now, you may be asking; what is a p-trap?

Quick Navigation
What is a p-trap and what is it for?
What are the advantages of a p-trap over other types of water traps?
What are the types of p-traps?
1. PVC p-traps
a. Swing joint p-trap
b. Glue p trap
2. Metal p-traps
Remember:
Conclusion
VIDEO: How to Change a P-Trap​

You’re probably also wondering what it’s for, and most importantly, what it has to do with your home and everyday living. In this article, I am going to answer the following questions: what is a p-trap? What is its purpose? What are its advantages over other water traps? Do I have to replace my non-p-shaped water trap? And, what are the types of p-traps?

It is important that every homeowner knows the basics about water traps, because they can and will affect the health and well-being of household members if a water trap is not appropriate for the corresponding plumbing fixture, or if, say, a water trap is not performing its proper function.

As a homeowner, I have not had any problems with my plumbing up until recently. Something smelled off and I found it very unsettling (since, of course, my bathroom was spectacularly clean). Upon checking the bathtub, the shower, underneath the sinks, and the most probable suspect of odors: the toilet; I could not find the source of the awful smell.

So, I found myself checking my pipes and found that the water trap underneath the sink wasn’t working properly. I could smell a faint odor of sewage coming up from the drain (the bathroom is on the first floor). Immediately, I changed my S-trap (it’s an old house) and replaced it with a p-trap.

What is a p-trap and what is it for?

In every plumbing fixture using water, there is always a water trap in the pipework designed to prevent gases from going back up the house. To explain it briefly, harmful gases are produced when a material (for example; food waste) decomposes in the pipes, and are also abundant in sewage.

In all water traps, the dip in the shape of the pipe causes the accumulation of water when there is no flow. This water creates a barrier between the opening of the plumbing fixture (for example, the drain in the sink) and the pipe leading to the sewage, therefore preventing gases and odors from backing up.

A p-trap is a more recent invention and can be found in newer or modern houses. It is a type of water trap that can run into the walls and thus connect to the vent pipes. These vent pipes allow the water to flow freely by maintaining air pressure in the plumbing. Without venting, as in older types of water traps, a trap may become dry and allow the gases to back up.

What are the advantages of a p-trap over other types of water traps?

The p-trap continues to replace S-traps and U-traps as homeowners update their plumbing systems. In fact, some types of traps other than the p-trap have been banned because of their susceptibility to drying up, even if they are well-ventilated. A water trap that is siphoned dry will allow harmful gases, bacteria, and viruses to back up into the house.

A p-trap is way less likely to allow this because of its design, given that it is installed properly. Now, do you need to replace a non-p-shaped water trap? To answer this question, go into your bathroom or kitchen where the water trap is located, and sniff the air for any unusual odors.

If you smell anything even remotely unpleasant, and you suspect that the source is your plumbing, you need to r﻿﻿﻿eplac﻿﻿﻿e your water trap immediately. These gases can be very harmful to the body when inhaled.

On the other hand, if no foul smell can be detected, you may still want to look into updating your water traps. An S- or U-trap may dry out eventually, and it’s still better to deal with the potential problem rather than face it when it’s already there. (Trust me, I’ve been there)

What are the types of p-traps?

If you find yourself wanting to replace your current water traps with a p-trap, you can choose from different types of p-trap in terms of the material it’s made of. There are two main types of p-traps: 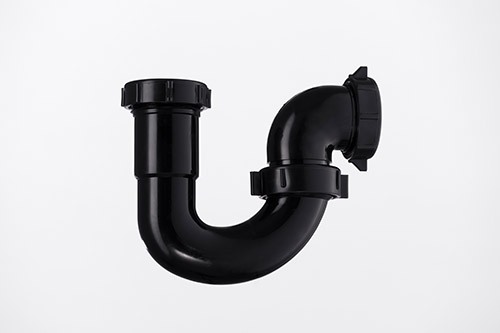 A P﻿﻿VC p﻿﻿-trap will be less likely to corrode and can last longer. It is a common type of p-trap found in houses and commercial buildings. There are also two types of PVC traps:

This p-trap is ideal for people who want to install a new sink or replace an existing trap. A swing joint p-trap can be removed after it is installed and can easily be repaired.

On the other hand, a glue p-trap is installed by gluing it to the connecting pipes. Unlike the swing joint p-trap, it cannot be removed and thus is difficult to repair.

There are different types of metal traps. Namely; steel, brass, iron, chrome, and others. Metal water traps are generally more resistant to heat than PVC pipes, but cost more. 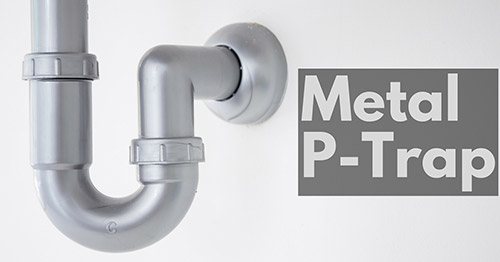 When choosing between these two types of water traps, it is important to know where you are going to place them. A PVC trap lasts longer because it is relatively resistant to corrosion and damage due to chemicals. A metal trap is resistant to heat but susceptible to rusting, and are likely to “rot” in about 5-10 years.

If you are consistently using hot water in a particular plumbing fixture, it will be probably more advisable to use a metal water trap. Otherwise, a PVC water trap will last a long time against corrosion and chemicals, but cannot be used for large buildings due to fire safety concerns.

When I replaced my water trap for my bathroom sink, I determined that a PVC trap was most appropriate. It could last longer, and it can be assured that it wouldn’t undergo too much heat (I definitely wouldn’t be pouring boiling water down there). Additionally, it’s cheaper than a metal trap, so that’s a plus!

A well-installed p-trap lasts longer and does its function better!

Now that you are familiar with the basics of water traps, specifically, the p-trap, you may want to consider replacing your outdated traps due to their hazard to health and home.

Before replacing a water trap, select a type of material that is fit for your use. If your sink consistently uses hot or boiling water (usually in kitchens in commercial establishments), it may be advisable to use a metal water trap to prevent leaks. In the home, it may be advisable to use PVC traps since they last for a very long time and can withstand rusting and chemicals.

VIDEO: How to Change a P-Trap​

It is essential that every homeowner does not overlook any aspect of the home. Plumbing can be a very big pain when something goes wrong-- same with dryer problems that leaves you with soaking wet clothes. Before something happens, check for possible problems and employ solutions before they do surface. Take the time to look underneath your sinks and check if everything’s going smoothly as they should; you’ll most likely thank yourself later.

And that’s all the basic stuffs you need to know. Tell me if you found this article helpful. Also, if you have any questions, don’t hesitate to put them in the comments below. Thank you for reading!